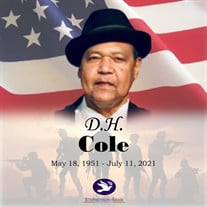 DH Cole was born on May 18, 1959 to the late George Willie Cole and Alma Thomas Cole in Robinsonville, MS. He was one of twelve children. He departed this life and moved to his new heavenly home on Sunday, July 11, 2021. He enjoyed life and never took life for granted. He received Jesus as his Lord and Savior and was baptized at the age of 17 years old. He also joined St. Paul Baptist Church. He graduated from Central High School in Alamo, TN. After his graduation, he joined the military (Army) at 18 years old in which he traveled and lived in such places as Arizona, South Korea, and served in combat in the Vietnam War. After DH’s assignment ended in the Army, he obtained an honorable discharge and came back to Tennessee in which he was married for 10 years and worked at Jones Factory for over 14 years until he retired. He loved to obtain wisdom and one of the most extraordinary accomplishments that he did was to read the entire Holy Bible from Genesis to Revelations. He loved western movies and he like to watch Mike Murdock Ministries on television.When you saw DH out, you would have thought that you were seeing “GQ!” He absolutely loved men’s fashion and was one the best dressed around! He had a very strong bond with his brothers and sisters! The late Larry Cole was his best friend. He loved his children deeply. He was preceded in death by his siblings: Willie Cole, Bernice Hendrix, Minister Alma Marie Wade, Larry B. Cole, Rochester Cole, Michael Cole and Peggy Marie Cole. He leaves a legacy of seven children, thirteen grandchildren and one great grandchild to fulfill their glorified purpose and destiny: Emily (Wash) Cooper of Memphis TN., Brandy (Marcus) Harris of Madison, Arkansas, Dawn (Christopher) Pewitt of Murfreesboro, TN., Latoya (Willie) Parks of Jackson, TN., Johnathan (Javetta) Cole of Houston, TX., Crystal Michelle Cole-Robinson of Alamo, TN., Deasia Cole of Jackson, TN, and just like adopted son Juan Rutherford. Grandchildren: Antwan Williams, Noah Christian Spann, Beth Lauren Smith, Anna Denise Cole, Tyler Elijah Pewitt, Amber Rutherford, Zakanias Liggons, Emiliana Grace Cobb, Paris Robinson, Karter Siggers, Tyrone Robinson Jr., Kameron Carter, and Josiah Cole. In addition, he leaves three sisters and one brother to cherish precious memories: Cora Midgett of Alamo, TN., Gwenda (Ivory) Hardville of Alamo TN. and Gloria Mayberry of Nashville, TN., Elton Truman (Eva) Cole of Alamo TN. He also leaves a host of nieces, nephews, other relatives and friends that he loved and cherished!

DH Cole was born on May 18, 1959 to the late George Willie Cole and Alma Thomas Cole in Robinsonville, MS. He was one of twelve children. He departed this life and moved to his new heavenly home on Sunday, July 11, 2021. He enjoyed life and... View Obituary & Service Information

The family of Mr. D. H. Cole created this Life Tributes page to make it easy to share your memories.