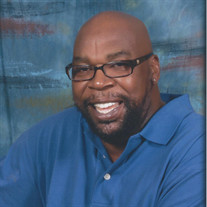 Charles Manley Sr., age 69 was born on August 2, 1949, to Rufus and Florence Porter Manley. He transitioned this life on December 1, 2018 at the Tennessee State Veterans Home. He grew up in Gibson County, Tennessee. As a child he attended Porter's Grove Missionary Baptist Church. He also attended Gibson County School System. He graduated from Stigall High School in 1967. Shortly after graduating he enlisted in the United States Armed Service where he served for ten years. During the time he served two tours in the Vietnam War. After retiring from the Military, he remained in Alaska until 1995 and was employed by the municipality of Alaska. In 1995 he moved to Detroit, Michigan where he was employed as as officer of the court until his retirement. After retiring he returned to Humboldt, Tennessee where he remained until his death. He was united in holy matrimony to Joyce Hardville on October 2, 2010. Upon returning to Humboldt, he reunited with the Porter's Grove where he was an active member until his health prevented it. He served as an Usher and sung with the Male Chorus and the Senior Choir. He was preceded in death by his grandparents, parents, five brothers and two sisters. He leaves to cherish his memory his wife: Joyce Manley, Children: Angela Wynne of Humboldt, Tennessee; Pamela (Donald) Glenn of Norfolk, Virgina; Dorothy Manley of Nashville, Tennessee; Valerie (Roderick) Addison of Anchorage, Alaska; Charles (Kahlil) Manley, Jr., of Columbia, S.C.; Dionne Hill of Grand Rapids, Michigan and Charity Manley of Denver, Colorado. Brothers: Rufus (Juanita) Manley, Willie (Inell) Manley, Henry Manley and Bobby (Diane) Manley. A special friend:Kenneth Harrison, who cared for him during his illness. Twenty-Five grandchildren, twenty-two great-grandchildren and a host nieces, nephews , other relatives and friends.

Charles Manley Sr., age 69 was born on August 2, 1949, to Rufus and Florence Porter Manley. He transitioned this life on December 1, 2018 at the Tennessee State Veterans Home. He grew up in Gibson County, Tennessee. As a child he attended... View Obituary & Service Information

The family of Mr. Charles Manley Sr. created this Life Tributes page to make it easy to share your memories.

Send flowers to the Manley family.