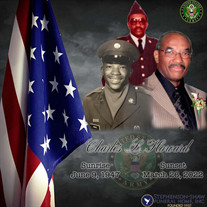 Charles L. Howard was born on June 9, 1947, in Henderson, TN to the late Fletcher and Easter Mae Howard. He was the youngest of eight children. On March 26, 2022, Charles Lester Howard departed this life at Jackson-Madison County General Hospital in Jackson, Tennessee. He was 74 years old. Charles accepted Christ at an early age at North Henderson Church of Christ where he became an elder and served until his death. He attended school in Chester County and graduated with the class of 1965 from Vincent High School. From there, he enlisted into the U.S. Army in April 1966, served in the Vietnam Conflict in which he received an Honorable Discharge in April 1968. While serving, he received a National Defense Service Medal, Army Combat Badge, Vietnam Campaign Medal and Vietnam Service Medal. He also served 26 years in the Tennessee National Guard until he retired. Upon returning from war, he went to work for ICG Railroad where his employment lasted for 18 years. He furthered his education by attending Crump Vocational School where he studied to become a residential electrician. From there, he was employed at Armstrong Flooring for 22 years until he retired. His passion was helping friends and neighbors with their electrical repairs as well as leading others to Christ. In his spare time, Charles enjoyed sports, hunting and fishing, gardening, meeting and talking to his fellow veterans, hanging out with avid members of the Chester County Senior Citizen Center but most importantly spoiling his grandchildren. Charles married the love of his life, Linda, and celebrated their love for over 51 years. They had three children. He was preceded in death by his parents; his beloved son: Brandon Howard; his brothers: Joe Howard and Erby Howard; his sisters: Dorothy Jones, Ann Jackson and Earsel Croom, as well as several aunts, uncles, and other relatives. Charles leaves to cherish his memories; wife Linda, sons Charles Dorran (Angie) of Knoxville, TN, Joseph (Emily) of Memphis, TN, Timothy (Latrisha) of Houston, TX, fifteen grandchildren, sisters: Mary Cowan of Bedford Heights, OH and Rebecca Couch of Indianapolis, IN, Aunt Helen Howard of Henderson, TN, four brothers-in-law, four sisters-in-law and a host of nieces, nephews, cousins, other relatives and friends.

Charles L. Howard was born on June 9, 1947, in Henderson, TN to the late Fletcher and Easter Mae Howard. He was the youngest of eight children. On March 26, 2022, Charles Lester Howard departed this life at Jackson-Madison County General Hospital... View Obituary & Service Information

The family of Mr. Charles L. Howard created this Life Tributes page to make it easy to share your memories.

Send flowers to the Howard family.