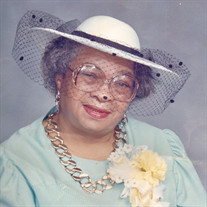 Mrs. Catherine McCurrie was number four of eighteen children born to the late Pink Hopper, Jr. and Rosina Hunt Hopper of Jackson, TN on March 19, 1928. She departed this life on Sunday, November 26, 2017 at the Maplewood Healthcare Facility. She professed a hope in Christ at an early age at St. James Missionary Baptist Church and united with Mt. Moriah Baptist Church. Later, she became a member of Macedonia Baptist Church, where she served faithfully until her health began to fail. She maintained a lifetime focus on that hope in Christ that strengthen, her, her family, friends and church eternally. Her favorite scriptures were Matthew 6: 9-13 and Psalms 35. She was educated in the public-school system of Jackson, TN. She went on to work as a CNA in several homes. Mrs. McCurrie united in marriage to Richard W. McCurrie, Sr., and to this union five children were born. She is preceded in death by her parents; her husband, three grandchildren, one great-grandchild, and a host of other relatives. Mrs. McCurrie Leaves to cherish her memories, three daughters, Virginia Ann (Ndubuisi) Azubuine, Catherine Faye Essien and Christine (George) Mayberry; two sons, Richard (Bridgett) McCurrie, Jr., and Willis T. McCurry; three sisters, Pocahontas Reed, Luecrecy Hopper and Arlene Hopper; twenty-six grandchildren, thirty-six great-grandchildren, eight great-great-grandchildren and a host of nieces, nephews, cousins, other relatives and friends.

The family of Mrs. Catherine McCurrie created this Life Tributes page to make it easy to share your memories.

Send flowers to the McCurrie family.