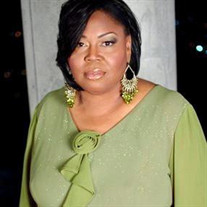 On November 23, Thanksgiving Day in 1966, the world welcomed the birth of Carolyn Cee Miller. A baby girl that was so different from all others. This child was born with vision, leadership charisma and a warm heart. Born in Cleveland, OH, to the late Dock Miller Jr. and Mrs. Nadine Miller. Carolyn graduated from Milan High School Class of 1985 where she participated in various activities that included marching with the band and being a member of the Lady Knights of the Roundtable better known as K.O.R.T., which allowed her to utilize her gift in music and the opportunity to serve others. Known for her gentleness and warm spirit, she became known as “Soft Touch”. Upon graduation from high school, she attended Tennessee State University, where she was a music major and member of the great Aristocrat of Bands. Carolyn always had a great big smile, a hug, and story to tell of her adventures as she pursued her vision from a young girl playing the piano and singing in church. Following the footsteps of her entrepreneurial parents, she ventured into business at the early age of selling candy at her mom’s beauty salon and owner of her own lemonade stand. Carolyn was successful with creating her own company “Soft Touch” Productions which open the doors to many young people who are successful business people in the music and productions industry. She was preceded in death by her father: Henry Doc Miller Jr., grandparents: Nathaniel and Alma Lou Armour, Henry Doc and Lillie R. Miller; aunts: Mildred Armour and Eldora Robinson, uncle: James Armour Carolyn leaves to cherish her memory: her two precious fur babies; Millions (cat) and Sweet Daddy (dog), a loving mother: Nadine Miller; brother: Shaun Beacum (Felicia) of Atlanta, GA; nephews: Jeffery Darnell Miller Jr. and Avery Lamar Miller of East Chicago, IL, one niece; Shahdai Beacum and one great nephew: Brycson Miller; aunts: Vivian Crawford, Mary Felton, Barbra Miller of Gary, IN and Mary Mance of Columbia, SC; uncle: Tom Miller of Gary, IN and host cousins and friends.

On November 23, Thanksgiving Day in 1966, the world welcomed the birth of Carolyn Cee Miller. A baby girl that was so different from all others. This child was born with vision, leadership charisma and a warm heart. Born in Cleveland, OH,... View Obituary & Service Information

The family of Ms. Carolyn Cee Miller created this Life Tributes page to make it easy to share your memories.

Send flowers to the Miller family.