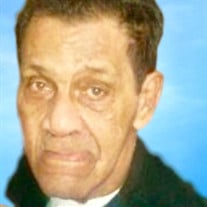 Bobby Eugene Wade was born January 16, 1936 to the late May D. Wade, Sr., and Husley Shilcutt Wade. He transitioned from this life on Thursday, March 9, 2017 at Tennova-Jackson Regional Hospital, at the age of eighty-one. Bobby attended Central... View Obituary & Service Information

The family of Mr. Bobby E. Wade created this Life Tributes page to make it easy to share your memories.