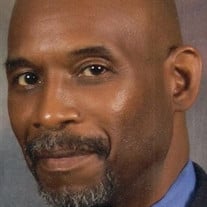 Billy Joe Liggons was born the fourth son of the late Willie Henry and Minnie Eleanor Taylor Liggon on September 24, 1957 in Bells Tennessee. He transitioned to eternal life on May 29, 2017. He professed a hope in Christ at an early age and was united with Fairview Christian Methodist Episcopal Church. Billy often said he was born to be a Minister of the Gospel. He often said he heard his call to the ministry when his father asked him what he wanted to be when he grew up at the age of 12. Billy immediately said, "A preacher," and his father asked him to preach a sermon, and Billy Joe did. His father would himself be killed three months later. Billy Joe was educated in the public schools of Bells, TN. He later pursed further education in Jackson, Dyersburg, Nashville, and Memphis. He was a graduate of Lane College and at the time of his passing he was a student at Memphis Theological Seminary. Billy Joe considered himself both a theologian and a historian of the church and he believed the greatest age of the church has yet to come. He was united in holy matrimony to Elizabeth Ann Floyd Liggons on May 5, 2012. Billy Joe was an Ordained Deacon and later an Ordained Elder in the CME Church. He served as pastor to various charges for over 36 years. In 2015 he was united with the United Methodist Church. At the time of his passing he was serving as pastor of Trinity United Methodist Church in Marks, Mississippi. He leaves to grieve and simultaneously celebrate his transition his wife, Elizabeth Ann Floyd Liggons, a daughter Le’Toya Gale Bolden, Dyersburg, TN, a son, Billy Joe Liggon, Jr. (Dornica), Jackson, TN and two grandchildren Adarius Jevar Liggons and Caleb Samaj Stokely; Three brothers Norfleet Ligon and Clifton Liggon (April) Bells TN; Charles Ligon, Memphis, TN; special aunts, Sirvern Webb, Hazel Hooker, Memphis, TNand Rose Lee Crook, Mansfield, OH; special sister-in-law and brother-in-law Charles and Lylia Bethea, Oakfield, TN, three brothers-in-law Willie Floyd Jr. West Memphis, AR, Paul Floyd ,Selmer, TN and John Floyd Jackson, TN, mother-in-law Lucy Floyd and a host of nieces, nephews cousins and friends to mourn his passing. He was preceded in death by a brother Cleada Liggon, Jr. nephew Marvin Shaw and father-in-law Willie Floyd, Sr. Billy Joe stated it was his wish that the church will continue to love God with all of their strength, mind, and soul, and that this love for God be expressed through loving one another, as well as their neighbors. He wanted as a part of his memory that all he loved would always remember the Sheldon­Rauschenbusch, “What would Jesus do?” He will be dearly missed by all who loved him.

Billy Joe Liggons was born the fourth son of the late Willie Henry and Minnie Eleanor Taylor Liggon on September 24, 1957 in Bells Tennessee. He transitioned to eternal life on May 29, 2017. He professed a hope in Christ at an early age... View Obituary & Service Information

The family of Rev. Billy Joe Liggons created this Life Tributes page to make it easy to share your memories.

Billy Joe Liggons was born the fourth son of the late Willie...

Send flowers to the Liggons family.