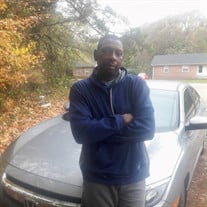 Billy E. Forman passed this life on Monday August 20, 2018. He was born June 1, 1961, to the union of Willie & Peggy Forman. He confessed his love & faith in Christ at an early age and was baptized in Flora, Mississippi. Billy met the love of his life Ms. Cheryl Chatman in 1985 and was united in marriage on August 2, 1991. He attended Danville School District #118. He was self-employed in carpentry, painting, hauling, lawn care and was known to be a “Mr. Fix It” for thirty years. Billy was a loyal sports fan of the Dallas Cowboys & the LA Lakers. He enjoyed large family cookouts, fishing and making others laugh. His ultimate joy came in spending quality time with his wife, children & grandchildren and helping others. He was known by his closest friends as “Smokey”. He had such an enormous voice that he was not only heard but felt by anyone in his presence. Billy was the lead guitar player for the Forman Gospel Singers for fifteen years. In the late 70's he sang, played lead guitar and bass for Crimson Lace and his favorite quartet group was Harvey Watkins & the Canton Spirituals. He was preceded in death by his father, two brothers, two nieces, a son & daughter and a grandson. He leaves to cherish his memory, his beloved wife, Cheryl Forman; two sons, John Walls II of Jackson, TN and Aaron Wilkes of Danville, IL; five daughters, Menico, Tambeisha (Courtney), Felicia, Sakara (Cornelius) of Jackson, TN, Dacia Clark of Indianapolis, IN; twenty-two grandchildren; his loving mother, Mrs. Peggy Forman; four brothers, Robert, Terry (Karen), Aaron (Tamara), Johnathan of Danville, IL; three sisters, Sandra, Pastor Melissa (Russell), Felicia (Shonell) of Danville, IL; and a host of nieces, nephews, in-laws and other relatives and friends. He also leaves Three special nephews, Shonell Jr. “Booder”, Willie and John Forman and a beloved grandson who became his shadow “Jhi’Quarion”.

Billy E. Forman passed this life on Monday August 20, 2018. He was born June 1, 1961, to the union of Willie & Peggy Forman. He confessed his love & faith in Christ at an early age and was baptized in Flora, Mississippi. Billy met the love of... View Obituary & Service Information

The family of Mr. Billy “Smokey” Forman created this Life Tributes page to make it easy to share your memories.

Send flowers to the Forman family.