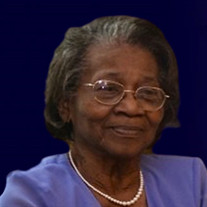 Ms. Bessie Lee Siddell Boykin, daughter of the late Willie Mae and Herbert Siddell, was born January 1, 1929. She departed this life on Tuesday, April 10, 2018. She grew up and attended school in the Humboldt and Gibson TN area. She was the eldest of 15 siblings, five of which preceded her in death namely; O.T. Siddell, Willie B. Siddell, Eva Marie Siddell, Edward Siddell, Rosie Butler and Roetta Pitts. She is survived by siblings, Johnny Siddell, Guy Siddell, Ida B. McCurrie, Sarah McCurrie (T.L. McCurrie), Gladys Williams (Ernest), Linda Siddell, Frances Lumpkin (J. B.) and Patty Siddell. At an early age, she professed her faith in Jesus. As a younger adult she raised her family in St. James Baptist Church in Humboldt, TN, but departed this earthly life as a member of Williams Chapel Baptist Church. Bessie, who was affectionately known and referred to as “Ma Bessie”, was united in marriage to W.Z. (Dub) Boykin in 1949. They raised six children, Martha Nell, Petunia, Jerry, Sheila, Bruce and Bob. Bessie was employed for a number of years at the Milan Arsenal Plant in Milan. TN and later at Eaton Axle in Humboldt, where she met lifelong friends. She was employed in her later years with Humboldt Nursing, and retired as an employee of Dr. V. Art Murphy. After becoming ill and unable to live independently, Ma Bessie moved to Memphis with her daughter Petunia and granddaughter Deshatte. The family is forever grateful for the care that she received from them. Bessie was known for her generous spirt and very pleasant and amicable personality. She got along with everyone. She especially enjoyed her neighbors, the Simmons, and the fun we all had with the family on Osborne St. in Humboldt. She will forever remain in the hearts of all that knew her. She quietly departed this life on Tuesday, April 10, 2018 in Memphis, TN and now joins her devoted and loving Husband, W.Z. (Dub) Boykin, her daughter Martha Nell Boykin Jones, her sons Jerry Lee Boykin, Bruce Boykin, and Bob Boykin in heaven. Her beautiful spirit and life will forever be cherished and remembered by her daughters, Petunia Pettigrew (Robert H. Pettigrew), Memphis, TN; Sheila B. Stevenson, Nashville, TN; her daughter in law Kay Boykin, Nashville, TN, with whom she shared a special relationship; eleven grandchildren; Andretti Jones, Carisa Jones, Deshatte Pettigrew, Dewayne Pettigrew, Jerome Pettigrew, Jamaal Boykin, Adrian Turner, Drew Stevenson, Corey Stevenson, Cadedra Boykin and Neicy Patterson and a host of great grandchildren and great-great grandchildren; her surviving siblings, and a loving host of nieces, nephews, cousins, and lifelong friends.

Ms. Bessie Lee Siddell Boykin, daughter of the late Willie Mae and Herbert Siddell, was born January 1, 1929. She departed this life on Tuesday, April 10, 2018. She grew up and attended school in the Humboldt and Gibson TN area. She was the... View Obituary & Service Information

The family of Mrs. Bessie Boykin created this Life Tributes page to make it easy to share your memories.

Send flowers to the Boykin family.