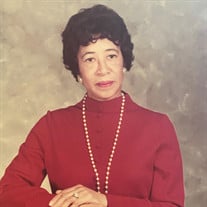 Bertha Hill Hutson was born on November 4, 1928, in Grand Junction, Tennessee to Alfred Hill and Lazene (Irons) Hill. She was one of eight children. She departed this life on Wednesday, September 9, 2020, in Jackson, Tennessee at the age of 91. As a child Bertha enjoyed playing with her siblings. As a teenager, she worked to save money for college. After graduating from Merry High School, she attended Lane College in Jackson, Tennessee where she received a Bachelor of Science degree in 1952 in Elementary Education. Later, she received a Master of Arts degree in Elementary Administration in 1972 from Colorado State College in Greeley, Colorado. Bertha taught in the Jackson-Madison County School System. She was a highly respected educator who had a love and passion for her students. She met the challenge and devoted over 40 years of her talent and skills teaching and stimulating young minds in order to create student success. Bertha was a member of Delta Sigma Theta Sorority, Incorporated. She was initiated on January 1, 1949 in Beta Chi Chapter while attending Lane College. She held various offices in the Jackson, Tennessee Alumnae Chapter and served on numerous committees. She was especially dedicated to the Miss Bronze West Tennessee Scholarship Pageant. Bertha was a member of the Lane College National Alumni Association and was actively involved in the Jackson, TN Chapter where she served on the Homecoming and Membership committees. She was a member of the National Sorority of Phi Delta Kappa, Incorporated and a charter member of the Gamma Psi Chapter, Jackson, TN, where she served faithfully until her death. Bertha was a member of the Links, Incorporated where she took an active role on the Finance and Fund-Raising committees. Bertha was a charter member of the Rosette Club, Jackson, Tennessee. She was a devoted Christian who loved the Lord and her church. She was a faithful member of New Greater Bethel A.M.E. Church where she served throughout the years. She was preceded in death by her parents, siblings, and spouse Copeland Hutson. She is survived by five nieces and one nephew: Gloria Bryant (Michael) of Leawood, KS; Yvonne Gould of Savannah, GA; Thelma Hill of Philadelphia, PA; Charles Miller of Dayton, OH; Millicent Dickerson of Jackson, TN; Pamela Styles of Nashville, TN; one great niece, four great nephews, six great-great nieces and seven great-great nephews. She is also survived by a stepdaughter, Cheryl Hutson-Law of Tampa, FL and a stepson, Edward Hutson of Shaker Heights, OH. In lieu of flowers memorial contributions may be made to Ms. Bronze West Tennessee Scholarship Pageant, Delta Sigma Theta, Inc., P.O. Box 1463, Jackson, TN 38302.

Bertha Hill Hutson was born on November 4, 1928, in Grand Junction, Tennessee to Alfred Hill and Lazene (Irons) Hill. She was one of eight children. She departed this life on Wednesday, September 9, 2020, in Jackson, Tennessee at the age of... View Obituary & Service Information

The family of Mrs. Bertha Hill Hutson created this Life Tributes page to make it easy to share your memories.

Send flowers to the Hutson family.