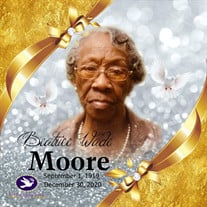 Sister Beatrice Wade-Moore, Miss Bee as she was fondly called, was born September 1, 1919, to the union of the late Rev. Alonzo “A.L.” Wade and Mrs. Commie Williams-Wade in Gibson County, Fruitland, TN. Beatrice was the third child born to this union. Two brothers preceded her in death. Mrs. Wade-Moore came to Christ in 1926 under the pastorate of Rev. R.O. Lankford, and united with Lane Chapel C.M.E. Church. Since her father was a C.M.E. Minister, she spent most of her time going to many of the churches in West TN. She attended the Annual Conference, Union City District, Brownsville District, Dyersburg District, Memphis, TN, Jackson, TN where she dedicated, devoted and faithful. She attended both District and Annual Conferences. Her parents were sharecroppers, she grew up on a farm, and participated in a lot of farm work. Her parents wanted her to have a good education; they relocated to Humboldt, TN. Miss Bee attended Stigall Elementary School in Humboldt, TN, however she graduated from Rosenwald High School in Trenton, TN in 1940 where she was an excellent student. Miss Bee earned a BA degree in 1944 from Lane College in Jackson, TN graduating with honors. Later she attended Tennessee State University where she received her master’s degree in Education and Administration, focusing on a PHD. She walked and drove in rain and snow to do the job she loved the most. Miss Bee’s teaching career was in West Tennessee, Middle Tennessee, and the State of Illinois doing what she was called to do with love, pride, and joy. She retired after forty years of service, from Gibson County School District where she received many honors and certificates of distinction from various counties. She continued to teach basic education to adults after retirement. There were many lay persons, ministers, Bishops, and friends that helped her along the way. She touched many lives of all ethnicity, who have moved on to become very successful, “doctors, policeman, lawyers, teachers, pastors, and some who served in the United States Military. Her motto was “come to learn and not to play.” Wherever she went she was loved and respected by all. Her adult affiliation included the District, Local Connection, and General Conference. She was a delegate for both District and Annual Conference. On many occasions she was asked several times to be the speaker. The positions she held were President of the Stewardess Board, Treasure of the Stewardess Board, Secretary of the Sunday School, Sunday School teachers, District Assistance, and Lay Leader. Miss Bee was a member of the Order of Eastern Star, Sun Rise Chapter No.24 of the Jurisdiction of Tennessee. She served as Ruth of the Star. She had a great love for traveling to the Grand Session and met many people who became life-long acquaintances. In addition to being encouraged by her parents, there were others such as school instructor in North Jackson District of the C.M.E. Church, the late Myrtle Lowery, late Mary B. Barnett, late Gussie Adams, late Juanita Morris, Gorgia wisdom, Minnie Hill, Vivian Hawkins-Robinson, Winnie L. Foster, late Addie Roe, late Neida F. Williams, Pandora Flake, and the late Myrtle House. Mrs. Beatrice married the late Mr. H.L. Moore, and no children were born to that union. He was a loving husband and father to her only son James Edward Wade. Mr. Moore was a Sergeant in the Army and received a Purple Heart. Mr. Moore preceded her death. Miss Bee has been a classmate and served with many bishops, presiding elders, pastors, and general officers, who spoke very highly of her. The community, church, and city will remember her for the spirit of love, understanding, and learning that she has shared with others in her life and will truly be missed. The church was her true love. Mrs. Beatrice Wade-Moore was a strong woman, a devoted wife and mother, grandmother, great-grandmother, aunt, and friend. She tried to instill a sense of independence, and self-worth to her devoted son James Edward Wade. She leaves to mourn her passing, her son, James Edward Wade (Joyce) of Daly City, CA. Grandchildren Sonji D. Wade of Antioch, CA, Christian D. Wade of Stockton, CA, Craig L. Snelling Esq. (Anakarita) of Oakland, CA. Great-grandchildren Marquez and William Thompson, and Miko Fox of Antioch, CA., and Christian James Wade of Stockton, CA. Late sisters-in-law Shirley (Eugene) Williams, Marie Moore Jones, brother-in-law Thomas Earl Moore. Former daughter-in-law Annie Loris Wade of Stockton, CA. A host of cousins and friends in Georgia, Michigan, Illinois, and Hawaii. Memorial Celebration will be scheduled for a later date.

The family of Mrs. Beatrice Wade Moore created this Life Tributes page to make it easy to share your memories.

Sister Beatrice Wade-Moore, Miss Bee as she was fondly called,...

Send flowers to the Moore family.