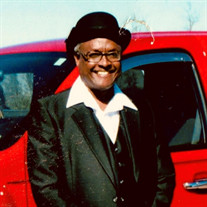 Barry Floyd Sain was called home on Saturday, April l9, 2020. He was born on January 11, 1961 in Crockett County, TN, the son of Melvin and Laura Sain. At an early age he confessed his hope in Christ, and was baptized on October 26, 1975, in... View Obituary & Service Information

The family of Mr. Barry F. Sain created this Life Tributes page to make it easy to share your memories.

Send flowers to the Sain family.