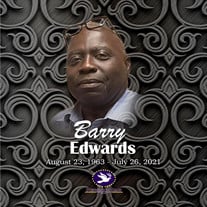 Barry Leonard Edwards was born to the late Leon “Buck” Edwards and Nancy Edwards on August 23, 1963. He was the fourth of seven children. He departed this life on Monday, July 26, 2021. He graduated from Gibson County High School in 1982, where he took pride in scoring the first touchdown on the Gibson County Football Field. In October of 1987, he married the love of his life LaQuita “Tweety Annette” Bufford. He married her on her birthday so she wouldn’t forget the date. Many of people came across him during his employment at Gibson County High School, as he worked many positions for over 20 years. “Big Worm” as many called him, also touched lives while he was employed at Doughboys, Little Caesars, Dominos, Trenton Mills and Kellwood. He was lastly employed at the Gibson County Sheriff’s Department for at least eight years, many addressed him as Officer Edwards. He genuinely loved the Inmates and all his co-workers. He later founded his own mentoring group: West Tennessee Men on Mission due to his love for children and change the world. He was recently sworn in as a Court Appointed Special Advocates (CASA) Volunteer to further his love for children. He was preceded death by his parents, his brother; Anthony Edwards and twin granddaughters: Kaila and Kila Holliday. He leaves to cherish his memory his wife: LaQutia Edwards; his children: Tashua “Tit” Edwards of Nashville, Tennessee, Tywa “Shawnta” Woodruff, Tareka “Ree” Edwards, Terameka “Rat” Edwards all of Dyer Tennessee and ReKeysha Edwards of Trenton, Tennessee; two sisters: Felicia Quick of Humboldt, Tennessee and Regina Edwards Cannon of Minnesota; three brothers: Jerry Edwards of Elkhart, Indiana, Terry Edwards and Gary Edwards both of Humboldt, Tennessee; grandchildren: Makenlye, Jay, MaLayiah, J’Shyn and Madysen , Ca’Ziya Ka’Laija, Camari, Ka’Liya and Khalil all of Dyer, Tennessee, Nyreyara, Na, and Na’Javian all of Nashville, Tennessee; sisters-in-law: Perry (Janice) Sharp of Gibson, Wells, Tennesee and Dorothy “Faye” Ervin of Dyer Tennessee; five adopted daughters: Destiny Lawrence, Cheree (Danny) Simmons, Maghan Jackson, Ashley Bevis and Stacey Williams; 25 adopted grandchildren, four adopted nieces and host of other relatives and friends, He also had an extended family: DogHouse Productions.

Barry Leonard Edwards was born to the late Leon &#8220;Buck&#8221; Edwards and Nancy Edwards on August 23, 1963. He was the fourth of seven children. He departed this life on Monday, July 26, 2021. He graduated from Gibson County High... View Obituary & Service Information

The family of Mr. Barry Leonard Edwards created this Life Tributes page to make it easy to share your memories.

Send flowers to the Edwards family.