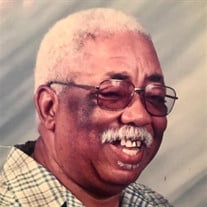 Arthur "Lee" Butler, Sr. was born on June 19, 1946 in Humboldt, Tennessee. On Monday, May 6, 2019, God sent his death angel to Jackson Madison County General Hospital to guide "Lee" or as his devoted wife always called him "Arthur" on home to be with our Lord and Savior. He was born in Humboldt, the eighth child and the second of three boys, born after the birth of six girls, to the union of the late O. D. Butler, Sr. and Viola (Harris) Butler. There would be more brothers and sisters to come after him for a total of thirteen children and the raising of five grandchildren, and if you are counting, that's eighteen ya'll!  Arthur "Lee" Butler, Sr., attended the Antioch Grade School and graduated from Central High School. "Lee" professed his faith in Christ at an early age and joined the Antioch Missionary Baptist Church, where he attended until he married and moved to Henderson, Tennessee. In December of 1968, "Lee" united in marriage to Arnell Frances Johnson, if you are counting, that's 50 years ya'll!  "Lee" and Arnell shared 50 Years together as husband and wife and "Arthur" had several bouts with illness during their years together, but his wife and partner remained steadfast and unmovable as a loving, caring, dutiful and faithful wife, doing whatever she could to provide her husband comfort. For these deeds Arnell, his brothers, sisters, nieces, nephews, cousins, in-laws, all of his friends and family will be forever grateful. From this union two equally devoted children who "loved their daddy" were born. A son, Arthur Lee Butler, Jr. "Bootsy" and a daughter Shameeka Elizabeth Butler. Arthur "Lee" Butler, Sr. was a resident of Henderson, Tennessee for over 50 years. He enjoyed planting his garden, cooking, baking, making homemade bar-be-que sauce and was fondly known as the "pie man" to the Henderson and Humboldt community. His family and friends also know that Arthur "Lee" Butler, Sr. loved "talking on the telephone" and many of us would give anything to still get that daily phone call from "Lee"!  "Lee" was employed by Jones Manufacturing Company in Humboldt, TN for many years before retiring in . He was preceded in death by both parents O. D. Sr. and Viola Harris Butler, his sisters Eula V. Butler and Linda F. Butler Brown-Warren, his brother O. D. Butler, Jr. "Brother", and his sister Ardella Butler Collins "Della". He leaves to cherish his memory: His wife, Arnell F. Butler; One son, Arthur Lee Butler, Jr. "Bootsy" and one daughter, Shameeka Elizabeth Butler, all of Henderson, TN. One Grandson Arthur Lee Butler, III "Tre" of Jackson, TN and two Granddaughters Ariel Lynae' Butler and Morgan Elizabeth Baker both of Henderson, TN. One devoted daughter-in-law; Tracie Gray of Henderson, TN. Two brothers; Joe Larry Butler of Evansville, IN and Benny "Ray" (Mary) Butler of Louisville, KY; Six Sisters; Louise Butler Watts and Elizabeth Butler Walker "Liz" both of Henderson, KY, Ozzie Butler Brown-Grooms of Hackensack, NJ, Johnnie Butler Johnson of Humboldt, TN, Geraldine Butler Baldwin Mask "Gerald" of Phoenix, AZ and Brenda J. Butler of Humboldt, TN. Five nieces and nephews that were raised with "Lee": Lawrence Edward (Diane) Butler of Henderson, KY, Gloria A. Butler of Dayton, OH, Tyrone Harris Butler of Mt. Vernon, IN, Wesley Michelle Butler Epperson "Wes" of Memphis, TN and Debra Mayo Johnson of Columbus, OH. Three sister-in-laws; Gladys Bond of Henderson, TN, Peggy Rockingham of Indianapolis, and Doris Johnson of Indianapolis. "Lee" also leaves to fondly remember him, a host of other nieces, nephews, cousins and in-laws, numerous friends and extended family, patrons of his delicious pies and bar-be-que sauce and his Cool Springs Baptist Church family. We are thankful for the precious memories of "Lee" and will truly, truly miss him!

Arthur "Lee" Butler, Sr. was born on June 19, 1946 in Humboldt, Tennessee. On Monday, May 6, 2019, God sent his death angel to Jackson Madison County General Hospital to guide "Lee" or as his devoted wife always called him "Arthur" on home... View Obituary & Service Information

The family of Mr. Arthur Lee Butler Sr. created this Life Tributes page to make it easy to share your memories.

Send flowers to the Butler family.