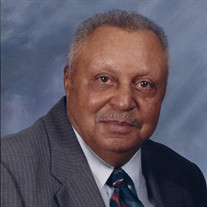 Arnold Roscoe Johnson, beloved husband and father arrived to his earthly destination on February 19, 1930 in Humboldt, Tennessee. He departed on June 11, 2016 at the Tennessee State Veterans Home in Humboldt, Tennessee. He was preceded in death by his mother Lillie Dee Johnson Moore and stepfather Romie Moore. An only child, he grew up in his grandparents John and Ada Johnson's household. He loved his grandparents, especially his grandfather. He told stories of how he and his grandfather would walk to the Crossing on Sunday morning to buy buffalo fish which his grandfather would fry for Sunday breakfast and how he would go with his grandfather to sell the sorghum that he and grandfather had grown and made. When Roscoe started school he assumed his grandfather's last name Johnson, not realizing he was following in his grandfather's footsteps as his grandfather assumed the Johnson name from his adoptive parents, Cherry and Gus Johnson. His grandfather's mother died when he was only two or three years old, his last name is unknown. As an only child, Roscoe spent his early years surrounded by cousins Elmer Lee, Naaman and Sherman Johnson was well as life-long friends the Wellford and King brothers. He attended Stigall Elementary and Stigall High School. After a stint in the Army, he was drafted into the Air Force during the Korean War where he served a military police. He was a truck driver with Beare Ice Company. Taking the opportunity to learn a trade, he became one of a few black cement masons in the area. His work can be seen in the Carl Perkins Civic Center, Pickwick Dam, UTM and the wastewater plant in Iuka, Mississippi. His work can also be seen in area churches such as Morning Star and St. James Baptist Church in Humboldt, Tennessee and his home church Miracle Revival Tabernacle. When his eye sight failed, he could always depend on Deacon Terry Henning and his wife Frances to take him to Church every Sunday. He loved to hunt and fish and tell stories of his childhood days, military and work experiences. You never needed a map or GPS with him in the car as he could tell you how to get just about anywhere. April 18, 1953, he married the love of his life Cora Frances Collier. To this union four girls were born: Kathleen (David) Woolfork, Gloria Dean (David) Cofer, Vickie Rene (Wayne) Andrews and Lillian Beth Shelton. In addition to his wife and children, he leaves to cherish his memory eleven grandchildren, a host of great-grandchildren and a lifetime friend James Pigue. Sisters-in-law, brothes-in-law, nieces, nephews, cousins, others relatives and friends.

The family of Mr. Arnold Roscoe Johnson created this Life Tributes page to make it easy to share your memories.