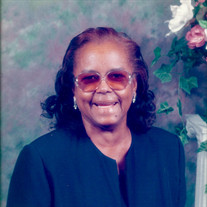 Missionary Annie Clay Brown began this life’s journey on February 6, 1934, as the 4th child of Mr. Henry Bass and Mrs. Zelma Bass in Henderson, Tennessee. She attended Chester County Training School and graduated in 1951. She was employed with the State of Tennessee, Western State Mental Hospital, with 30 years of service. Annie had a gift to sale she began selling world book encyclopedias and was successful in it. Her home became the homework community house for her family was only one that had encyclopedias. In May 10, 1953, she married in holy matrimony, Mr. Parnell Brown and to this union seven children was born. She professed her faith in Christ at an early age and United with Saulters Chapel A.M.E. Church. After being a dedicated servant and obeying the Lord she was led to join Henderson Church of God In Christ under the leadership of Pastor Draper. Missionary Annie Clay Brown was gifted and served the Church in various capacities. She was a Sunday School teacher, licensed Missionary, Church secretary, Hospitality President, President of Church Mother Board and State Register for YPWW 2nd Ecclesiastical Jurisdiction under the leadership of Bishop Audley King. She was a pillar of the community excellent cook known for her famous chess pies. She was always willing to lend a helping hand in those in need and a firm believer of visiting the sick and shut-in. Missionary Brown is preceded in death by her husband Parnell Brown, parents Henry and Zelmar Bass, two brothers Ray Bass, Robert Bass and beloved son Danny Brown. Those who will be most profoundly miss the warmth of her pleasing personality and the strength of her noble character included one sister Betty(Belated Walter) Williams, of Memphis, TN. three sons, Larry (Jackie) Brown of Henderson TN., Dexter (Dorothy) Brown of Dallas TX., Dennis(Cynthia) Brown of Washington LA.; three daughters Gloria(Frank)Holiday, Sylvia(Marles)Flowers, Audria(Darrin)Dunn, of Henderson, TN. Sixteen grandchildren, Maria Holiday, Desmond Ingram, Dantrail (Summer) Brown, Dannette Holiday, Felicia Brown, Frank Holiday Jr., Shonterria (Calvin ) Barham, Jasmine Brown, Henrietta Brown, Anicia Brown, Ellis(wife)Brown, Dominique Brown, LaWanna Holiday, Dimitric Brown, Cliff Brown and Edward Reeves. A host of great grandchildren, nieces, nephews, other relatives and friends.

The family of Mrs. Annie Clay Brown created this Life Tributes page to make it easy to share your memories.

Send flowers to the Brown family.