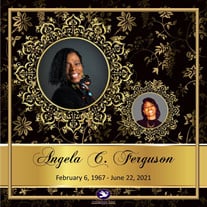 Angela Catrice Ferguson was born to Ernest and Charlene Conway on February 6, 1967 in Chicago, Illinois. Angela confessed and accepted Christ at an early age at King of Glory Church of God In Christ under the leadership of Bishop Shephard Little, where she attended with her Grandma Conway. She had a special anointing on her life even as a little girl. Angela was preceded in death in by her grandparents, Ernest and Juanita Conway, and Hawthorne and Semithis Swanigan all of Chicago,IL. Angela relocated to Kankakee, Illinois and was educated in the Kankakee Public School system. Angela joined the ministry at Christ Temple under the leadership of Elder Tubby Gordon where she would be later be ordained as an Evangelist. Angela’s desire to witness to God’s people went outside of the pulpit and anywhere she would go she would speak of God’s goodness. She prayed in a manner that touched the heart of man. She would always say, “To God be the glory”, when someone would say they enjoyed her prayer. Angela married Robert Ferguson on April 3, 1996 and relocated to Jackson, Tennessee. She joined the ministry at All Nations Church of God and also served with husband as the 1st Assistant to the Pastor. Angela had a passion for designing and decorating and went on to established Paraclete Enterprises. She had a deeper passion which led her back to school where she received her Bachelors of Social Work from Union University. She desired to work with women who were underserved and unheard. She had recently completed her application to return to school for her Masters in Social Work in the fall. Angela loved her family! She praised her husband Robert for his love, support, kindness, and for being her “rock.” She would always celebrate her children, sharing their successes and expressing her joy. She loved her grandchildren dearly, including her granddog Chicago. Angela departed this life on June 22, 2021. Angela leaves to cherish her memories and carry on her legacy; her husband Robert Ferguson; her children Aarion Swanigan, Alexis Johnson, Adrian Swanigan, Jeremiah Ferguson, Noelle Alexander , Caleb (Adriana) Ferguson and Genesis Ferguson; her mother Charlene Wilson; six grandchildren Taylor, Trinitee, Tylen, Nathan, Sarah, Brielle and Christopher; three sisters: Sonya Barker (Minneapolis, MN), Jeanan Stewart (Charlotte, NC), Shimada Johnson (Minneapolis, MN); one brother: Randy Turner (Minneapolis, MN); four uncles and seven aunts: Bernice Swanigan of Kankakee, IL, Darlene (Roosevelt) Bell, Brenda (William), Bernadine (Horace Sr.) Williams, Debra Dunlap, Dannie Swanigan and Hawthorne Jr. (Wondra) Swanigan of Chicago, Illinois. Ben Hill of Chicago, whom she considered her father figure. Six nieces, six nephews and host of friends. She had too many cousins to list.

Angela Catrice Ferguson was born to Ernest and Charlene Conway on February 6, 1967 in Chicago, Illinois. Angela confessed and accepted Christ at an early age at King of Glory Church of God In Christ under the leadership of Bishop Shephard Little,... View Obituary & Service Information

The family of Mrs. Angela Catrice Ferguson created this Life Tributes page to make it easy to share your memories.

Angela Catrice Ferguson was born to Ernest and Charlene Conway...

Send flowers to the Ferguson family.