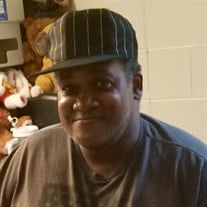 Alonzo D. “Big Boy/Smiley” Davis, was born August 1, 1969 to Mattie Pearl Harris and the late Billy Baskerville. He departed this life on July 17, 2018 at Forest Cove Nursing Home. To his family, he was known as “Big Boy”, and to others he was known as “Smiley”, because he always had a smile for everyone he met. Even in the nursing home, he smiled and helped the residents there just like he did before his illness in 2012. He had a special love for elderly and kids. Alonzo was educated in the Jackson- Madison County School System, where he was a graduate of Jackson Central Merry High School. He was employed at JCM where he worked in the cafeteria and at Phillips 66, until he became disabled. He enjoyed helping people and he loved to laugh and talk 100 miles per-hour, non-stop. He loved to listen to music and he loved going to church, whether he was in or out the nursing home. Alonzo was preceded in death by his father; grandparents, Charlie L. Davis, Jr. and Wiley Mae Davis; aunt, Darlene Davis; uncles, Jessie L. Davis, Charlie L. Davis, Jr., Clinton Davis and Clifford Davis, Sr.; great aunt, Magnolia Boles. He leaves to cherish his memories, his mother, Mattie Pearl Harris; sisters, Terisa (Tony) Kimmins of Jackson, TN and Jackie (Bryan) Lesure of Byhalia, MS; aunts, Sadre (Fentress) Dunn, Darlene Davis of Mason, TN; uncle (cousin) Eugene (Betty) Boles; nephew, Andrew Harris; Nieces, Antonia Kimmins, Elizabeth Kimmins and Kayla Harris; special friends, Ricky Love, Tarra Clark, Ruth Hood, Sheryl Love and Cherlyn Long; and a host of cousins and friends.

The family of Mr. Alonzo Davis created this Life Tributes page to make it easy to share your memories.

Send flowers to the Davis family.