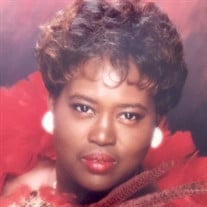 Ada Louise Bowers Quarles, 60, returned to her heavenly home on Saturday, August 19, 2017 after a valiant battle with cancer, which ultimately gave her peace. Ada was born to the late William T. and Rebecca Bowers of Jackson, TN on September 12, 1956. Ada was one of six children with two preceding her in death; William T. Bower, Jr., and Lenora Bowers. At an early age of 12, she professed hope in Christ at New St. Luke Baptist Church, Jackson, TN, where she was a devoted member of the Usher Ministry. Ada graduated from JCM in 1974, and went on to the further her education and graduated with a concentration in Business Administration. She recently retired from Jackson General Hospital after serving 38 years of service as a medical transcriptionist. Ada was kind and soft- spoken, and always left footprints of love and kindness in your heart with her smile. She always made time to answer a question or solve any problem no matter how big or small. She will be dearly missed by her love ones, who celebrates the fact that she is at peace now with her creator. Ada was blessed with a loving family. She married her best friend 43 years ago, Robert Earl Quarles, on December 28, 1974 in Jackson, TN. Ada leaves to cherish her memory, one son, Desmond Quarles; one grandchild, Treveon Mosley; three sisters, Maggie (Harold) Neal, Patsy (Arvell) Winningham and Patricia (Willie Ray) Williams, all of Jackson, TN; two sisters-in-law, Sharon (Winfred) Parker and Phyllis Quarles; Four brothers-in-law, George, David, Warren and Phillip Quarles, all of Mississippi; seven special friends, Mattie Forbes, Elaine Stevenson, Betty Rogers, Charlotte Price, Carolyn Fuller, Marva Perry and Greta Young; and a host of nieces, nephews and other relatives and friends.

Ada Louise Bowers Quarles, 60, returned to her heavenly home on Saturday, August 19, 2017 after a valiant battle with cancer, which ultimately gave her peace. Ada was born to the late William T. and Rebecca Bowers of Jackson, TN on September... View Obituary & Service Information

The family of Mrs. Ada Louise Quarles created this Life Tributes page to make it easy to share your memories.

Send flowers to the Quarles family.